An electric current flowing through a circuit cannot be seen, but it causes a light to switch on which can be seen. The current of Allah’s love flows through our heart and minds. We may not see it within ourselves or others, but it leads to the obedience of Allah which is a light that can be seen. The sign of a break in an electric current is that the light will not switch on. An electrician needs to be called now, to identify and fix the fault.

The sign of a break in the current of love for Allah, it that a Saalik (a follower of Sufism) will be inclined to disobedience. A Shaikh needs to be called now, to identify and fix the fault. What has caused his love for sin to overpower his love for Allah? Is it Nafs, Shaytaan, or a change in circumstance? The Shaikh is skilled in this regard. He will ask him all the relevant questions, enquiring until the fault is found. Once identified it can be fixed immediately, allowing the current of love to flow smoothly again.

If there is no electric current, the freezer will defrost. If the electrician is quick, he will save the day. However, if it is left broken for too long, the food will rot and emit a foul smell. Now it will take much longer to sort the problem out. Though the fault was small, he left it for long and now it has disastrous consequences. Likewise, when we notice a spiritual weakness, we need to seek help as soon as possible. Otherwise, as time elapses it will worsen leading to disastrous consequences.

May the current of Allah’s love flow through our bodies causing us to live in His obedience and pleasure. Aameen. 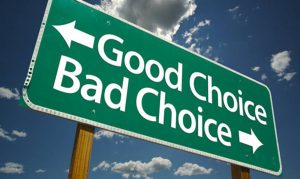 Life is full of choices. At times, we get carried away with our ability to choose between obedience and disobedience. We forget that this choice is a test, not a mark of our authority. In academic exams, those that studied hard would be able to answer correctly, whilst those that did not study would answer incorrectly. Both take the exact same paper, but the former will pass whilst the latter will fail. The exam is taken by all, not just the hardworking students.

Likewise, is life. We are living an exam, those that sin unrepentantly are exercising their choice for which they will soon pay the price. Upon death, this ability will cease to exist. Have you ever seen a deceased man come out of his grave, refusing to be buried? No, because he has no choice. We must not allow it to delude us into thinking we have control over our lives. On the Day of Judgement, our own limbs will speak out against us so what control do we assume, when our own limbs will be out of our control?

When the adhaan calls, you can choose to sleep or wake up for prayer. That is a test. Do not be deceived, your choice will not last for long. When the trumpet is blown, no one will be able to continue sleeping. We will all awaken and march in the same direction, towards an inescapable reckoning.

Therefore, in this worldly life, choose wisely. Those that do not follow Deen, outwardly, it may seem that they are free and in charge of their lives. But in reality, their choices are answers being recorded on this exam of life, for which they will soon pay. Our choice is only given to write this paper. Upon death it will be taken away from all, and gifted back to those who enter Jannah. There in the gardens, their choice will no longer be a test. It will be a blessing via which they will live and do as they please.

May we be amongst them, Aameen.

I was walking with my children a few days ago and we came across a monkey. A moth flew into his hands and began hopping around until eventually, the monkey caught him in its grip. He was ready to devour the moth but suddenly his grip loosened, and the moth flew away. The moth began soaring high into the sky. The monkey jumped behind trying to catch him, but he was too high to reach. Just then, a bird came flying in that direction. The moth literally flew into the bird’s mouth and thus, the bird had his meal for the day.

From this little incident we can extract many valuable life lessons. In the search for wealth we are often like that monkey. We jump behind many opportunities to make as much money as possible, taking on our shoulders far more than we can bear. Understand no matter how hard you try, if it is not decreed for you, you will never acquire it. Just like the moth that flew right out of the monkey’s grip. So, do not be so hard on yourself.

In contrast, the bird did not exert any effort, yet his food flew right into his mouth. A little while later the monkey searched the bins and found something to eat. Therefore, never become despondent. Your efforts never go in vain. Perhaps Allah has also decreed your sustenance elsewhere. His treasures are unlimited, and He always has something in store for you.

To acquire it, we should not allow ourselves to be humiliated in our jobs. Some of us have bosses who swear and shout whilst we work like slaves for them. This is not what Allah wants from us, He does not expect us to endure humiliation. If you are not respected as a human being where you work, search for work elsewhere. On the other hand, never be the one to humiliate those that work for you. You are not paying them, Allah is paying them via you so be kind.

The second lesson we can learn is on perspective. When the moth was trapped in the hand of the monkey, it appeared that he would be eaten in his hands. Whereas in reality, he was safe there. As soon as he flew out he thought he had acquired freedom. Little did he realise, he was flying to his death. Likewise, we often find ourselves trapped in the hands of difficulty. The measures we take to come out of it must always conform with Shariah. If it does conform, then know that you have pleased Allah and this temporary difficulty of yours will be a means of permanent ease in the hereafter. However, if it does not conform to the Shariah, then no matter how free we may seem death will eventually catch us out.

For example, in a financial problem it is impermissible to take a loan with interest. Those that do may seem to be flying high financially with a stable home and job. Little do they realise; the angel of death is waiting, and this financial freedom will eventually lead to destruction. Therefore, do not fall in love with mere worldly delights. Know that nothing is fool proof in life. Never be too sure of yourself or your means. Understand that life will be full of tests so do not reduce yourself or sacrifice your faith to come out of them. Rather, adopt a dignified means coupled with reliance on the Almighty, and your tests will soon turn into blessings in disguise. May Allah make it so, Aameen.

Title: Performance of Hajj cannot be delayed just as Salaah and Fasting cannot be postponed once Fard

Aayah 97 Surah Aal Imran
ولِله عَلَى النَّاسِ حِجُّ الْبَيْتِ مَنِ اسْتَطَاعَ إِلَيْهِ سَبِيلًا ۚ وَمَن كَفَرَ فَإِنَّ اللَّهَ غَنِيٌّ عَنِ الْعَالَمِينَ
“Hajj is fardh up the people as a duty to Allah for whoever is able to make his way there. But whoever disbelieves – then indeed, Allah is free from need of the worlds.”

Hajj is a Spiritual journey for believers wherby they go to Makkah, Minaa, Arafah and Muzdalifah. Then every lover of Nabi ﷺ would also want to go to Madeenah Munawwarah. It is a Beautiful and wonderful experience.

Hajj became fardh in 9 A.H. Nabi ﷺ Sent Abu Bakr with a group of sahaaba. Nabi ﷺ was not commanded by Allah Taala to perform Hajj this year. There were still disbelievers present in Makkah who would make tawaaf unclothed, thinking it to be an act of piety, since they thought that it would be wrong to carry out this act of worship in clothes with which they had sinned. This is the harm of being a free thinker, trying to use logic in understanding deen. This can lead a person to think a wrong action to be right.

9A.H was the last year that non Muslims were allowed after which they were banned right up to this day . One reason for this is that the kufr in their hearts attract the wrath of Allah Taala and these are sacred places where believers perform Hajj. A person feels privileged to make hajj with an Ustaad, Sheikh or Aalim. All the piety of everyone, cannot equal the rank of the lowest sahaabi. All Sahaaba can’t come close to any Nabi, and All ambiyaa cannot equal Nabi ﷺ. Then this very Nabi ﷺ with 124000 sahaaba gathered in Hajj. What a Hajj that must have been.

Hajj is just fardh just like Salaah or Fasting.  Sometimes a person has money, but says I’m not ready. The person feels I’m not ready for change. Not ready to get pious etc. so he procrastinates in performing Hajj. Can we do this for the fast of Ramadhaan? That I will postpone my fasting to another month? Likewise, immaterial of how a person feels, he has to perform his Hajj. Similarly, if a person has sufficient, even for just the days of hajj, then also he has to perform his Hajj. Even if it is just for the last 5 days only with no hotel etc. then too he still has to go if it is possible. Sometimes a person has sufficient for himself to go, but not enough to take his wife with. He cannot say that he will save, then go when there is sufficient for the both of them. It might sound romantic, but if maut comes, he died without fulfilling fardh. Youngsters  who are baaligh and have sufficient wealth, the parents cannot hold them back. If it is is fardh, at least put in the application, and make dua.

Those that are going, they are honoured. We should meet such people and request their duas. They are the ambassadors of the Ummat. They will be going to the royal court of Nabi ﷺ. Request them to also convey our salaam. May Allah Taala accept the Hajj of the Hujjaaj and their duas etc.

How can we make these preparations?

This is where our preparation should start. Insha Allah Taala this will become part of our lives and we will start reaping the benefits of this blessed and auspicious month from the first day